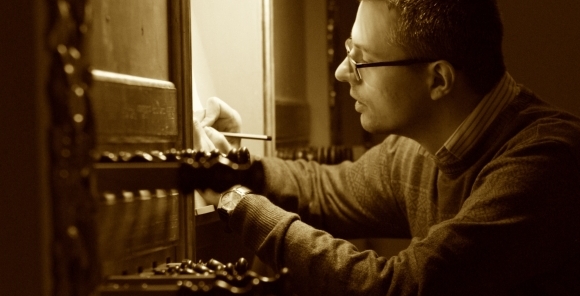 “Ever since people started building concert halls, the pipe organ has been thought the centerpiece of such venues. The organs constructed at the Arthur Rubinstein Philharmonic are unique in that they are two completely independent instruments in different historical styles. Either organ has its own set of pipes, even though they are incorporated in one façade. Such a solution makes it possible to present almost the entire range of organ music and experience it in one concert hall. Thanks to this pieces from different epochs can be performed in a way that is true to their original versions. One does not have to make artistic compromises, which is inevitable in the case of so-called universal organs. Now music from each epoch may be played most expressively and presented to the audiences just as it was envisioned by its composers” – says Krzysztof Urbaniak, organ consultant to the Arthur Rubinstein Philharmonic. Two organ recitals given this month provide an excellent opportunity to experience the full variety of organ music mentioned above. The concerts feature Krzysztof Urbaniak, a recognized organ expert, winner of many organ competitions, and artist-in-residence at the Arthur Rubinstein Philharmonic, as well as Ludger Lohmann, the author of the concept of the Philharmonic’s organs, winner of the prestigious ARD competition in Munich, and professor at the Staatliche Hochschule für Musik und darstellende Kunst in Stuttgart. The concert program offers a journey throughout the ages, ranging from the baroque master J. S. Bach, to Franz Liszt, one of the most prominent musicians of the romantic era, to works of 20th-century composers, Sigfrid Karg-Elert of Germany and Maurice Duruflé of France.