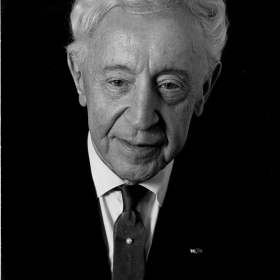 Heart and talent – two words you can describe how Arthur Rubinstein is regarded in biographies, memories, photos…

Artistic soul and genius led the fate of  long − lived ninety -  six year old piano virtuoso. Life was his great love which he was always faithful to...life he accepted as it was, with no resentment −  he embodied the desire to live. He spread subtle joy and serenity around him. Nonchalant and yet discreet, willing to joke and full of charm and elegance – this is how he lived and communicated to people his music.  His versatile interests and extensive knowledge reflected his energy and spirit. He had a good command of seven languages: English, French, Russian, German, Italian, Spanish and of course Polish. A good storyteller with an excellent sense of humour and wit became a subject of countless anecdotes. He radiated enthusiasm and shared his optimism with everyone around him.


‘I am a passionate enthusiast of life. I love its transformations, its mechanisms, its colours. To live, to be able to speak, to look, to walk, to have home, music, beautiful paintings – it’s just wonderful.’

He was always full of zest for life, even spurting energy – he was able to truly experience every moment. He was never tired or sleepy. He talked about himself that he could not slow down because if he did, it would have been the end of everything. ‘Such is my life!’ repeated the artist.
His life was a series of successful events, his brilliant career, fame and popularity, which accompanied him since he was ten – his enthusiasm and hunger for more enabled him to reach the top. As Jerzy Wladorff wrote on Rubinstein’s life: ‘What a life! What a joyful, continuous escalation from the house of a small merchant in Lodz to the best concert halls and salons of Europe and America.’

‘I have a house in Paris, New York and Spain but my home is my plane. I love it!’ A.R

Arthur Rubinstein was a type of a globetrotter. He travelled and lived not only in Europe. He felt great in the United States. He started early –  his talent was revealed at the age of ten. He began his studies in Berlin where he managed to win Heinrich Barth and Joseph Joachim as his guardians who took care of his development as a musician. At the age of 13 he was offered to participate in charity concerts, in which big stars also took part:  Sara Bernhardt, Mounet-Sully, the younger Coquelin, Felli Litvinne, Franςis Plante, Enrice Caruso and Geraldine Farrar. After finishing his studies in Germany, the young pianist went to Paris where he settled down in his first house. In Paris he also met his faithful friend and impresario – Gabriel Astruc. The outbreak of  the war forced him to emigrate to the United States. He went first to California, then to New York where he bought a second house.
Despite frequent travels, or perhaps because of them, Poland was always on his mind. The artist often expressed his patriotic feelings, including during the concert at the Opera in San Francisco which was organized to celebrate the formation of United Nations in 1945. The artist was so appalled by the lack of the Polish flag among flags of other nations that he played  The Polish National Anthem - Dabrowski’s Mazurka before the concert. The event deeply touched not only the Polish part of the audience...
After the war her returned to Paris, now dividing his life between the home visits in France and in the United States.

‘…Because the piano, sir, can also sing, not just rattle, but you need to know how to ask it nicely.’ A.R

Not only  did Rubinstein play the music but mastered it and studied to understand it. He was an outstanding expert on his repertoire. He knew how to link  tradition with originality and innovation.
‘I feel what I gave to people in my concerts was primarily my view on life, my attitude towards life, and my attitude expressed through music’

The great piano virtuoso found the contact with his audience truly rewarding  and always responded to them with great enthusiasm. He was also able to build rapport with his audience. He accomplished  it not only through his music and also with his unusual personality. He knew well how to communicate the feelings and values captured in the music of Chopin, Brahms, Beethoven,  Saint-Saëns, Schumann, Strawinsky, Szymanowski and would find the true  meaning of each piece.

‘I want to live! I passionately love life and I waste it on tapping into the keyboard pointlessly day by day’ A.R

He was never tired after a concert or a performance, recalled his close friend Roman Jasinski, who recounted with  astonishment how about 87 year old Rubinstein after performing would return home reluctantly. For him this was the beginning! It was an excellent opportunity to enjoy a langouste in mayonnaise – his favourite dish would like when he was young. One needs to note, he truly appreciated good cuisine, he was also an expert on the finest wines and knew which champagne tasted best.

Being a happy mean helped him to maintain his optimism even when he faced illness. A few years before his death, his eyesight started to gradually worsen and he played his last concerts without being able to see the keyboard. His ailing eyesight prevented him from performing   at the 75th Anniversary of the Warsaw Philharmonic in 1976. In spite of that, he did not lose his spirit, still loved life and accepted what it had brought to him, recalled Jerzy Waldorff.  ‘Opting for life, for its excitement and the novelty seems to be the final victory of the Artist’
( Jerzy Waldorff)

‘Lodz is a city which in an artistic sense requires the greatest effort from me. I was born here, it’s where my people are and I owe something to them.’ AR

Although Arthur Rubinstein was appreciated and adored world – wide, he always felt Polish in his heart and loved his home country.  He was particularly fond of Lodz, his home city which made him its Honorary Citizen. During his frequent travels, he came also to Poland, and every visit became an event on a national level. The important places were the ones  from his childhood where he felt welcomed by the dearest to him, friends and acquaintances. During his visit to Lodz in 1975, the Artist did sightseeing tours, visited places where he was born and talked to local people. The visit to Lodz had a particular meaning to him for the Celebrations of the 60th Anniversary of the Lodz Philharmonic. F. Chopin’s Concerto in F Minor and L.van Beethoven’s Concerto in E Flat Major which he performed with The Lodz Philharmonic Orchestra conducted by Henryk Czyz, were received very well by both the audience and the critics. In 1984 Aniela Mlynarska – Rubinstein − who died not so long ago – gave her husband’s memorabilia to the Museum of the City of Lodz. Their massive amount and huge value created a possibility to first organize an exhibition and then Arthur Rubinstein Music Collection. Everything happened on the occasion of gala concert  during which Arthur Rubinstein became the patron of The Lodz Philharmonic. Aniela Mlynarska-Rubinstein was an honorary guest and the performance of L.van Beethoven’s Concerto in G Major by Krystian Zimerman accompanied the evening.  In 1987 on 100th Anniversary of Arthur Rubinstein two concerts took place at Lodz Philharmonic led by his son – John Rubinstein. The programme of the concert included: Arthur Rubinstein’s favourite F. Chopin’s Concerto in F minor, M.Ravel’s Valses Nobles et Sentimentales, G. Gershwin’s American in Paris, and John Rubinstein’s Orchestral Suite from the film Amber Waves.

‘Since my early childhood, the music has always been as always natural as breathing or thumping of my heart. (...) I was born with music which I can call my sixth sense.’ AR
Our Patron was unquestionable a celebrated piano virtuoso over the world. His performance was described as the epitome of beauty, depth and...Polishness. An excellent technique and artistic sensitivity were the key features of his works. ‘Reading music a vista with no effort, inborn technical facility, outstanding memory, and finally instinctive musical ability, or one should mention – instinctive musical culture derived from his refinement this all helped this amazing artist to perform and charm his audiences in the whole world with no preparation’− as Jerzy Waldorff wrote about Rubinstein. The artist made about 200 recordings.  Loved by his fans and appreciated by the whole world, he cooperated with the best ones. He was awarded with countless awards and orders, he received honorary degrees from many universities. His charismatic personality became a subject for biographical films, among others, ‘I was always a happy man’ by Ludwik Perski and ‘L’Amour de la Vie’ awarded with the Oscar by Franςis Reichenbach.