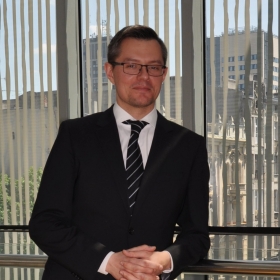 As of the 2017/2018 season, Krzysztof Urbaniak was appointed Curator of the Arthur Rubinstein Philharmonic’s two organs.

Mr. Urbaniak graduated from the Fryderyk Chopin University of Music in Warsaw in the organ class of Prof. Józef Serafin and the harpsichord class of Prof. Leszek Kędracki. In addition, he subsequently completed Prof. Ludger Lohmann’s organ class and Prof. Jörg Halubek’s harpsichord class (Künstlerische Ausbildung und Konzertexamen) at the Hochschule für Musik und Darstellende Kunst in Stuttgart. In 2012, he obtained a PhD degree from the Academy of Music in Cracow, and completed habilitation at the Bacewicz Academy of Music in Łódź in 2016. He has published extensively on organ building and various aspects of performing organ music.

Krzysztof Urbaniak has sat on the juries of many organ contests, including the 2nd International Organ Competition in Katowice (“European Baroque Organ Music,” 2014), Poznań (4th Academic Organ Competition “In Memory of Romuald Sroczyński”, 2014), and Alkmaar (International Schnitger Organ Competition, 2015). He also regularly conducts courses on historical organs (such as in Stralsund, Pasłęk, Gottorf, and Alkmaar).
As an organ expert, in recent years Mr. Urbaniak has consulted a number of major projects, including the construction of Baroque and symphonic organs for the Arthur Rubinstein Philharmonic in Łódź (completed in 2014 and 2015, respectively), conservation and reconstruction of the Andreas Hildebrandt organ in Pasłęk (completed in 2013), and organ conservation in Olkusz.

As an organ construction consultant, he has also led numerous organ renovation and construction projects. Since 2013, he has served as an expert on historic organs for the Polish Ministry of Culture and National Heritage. He is also the founder and director of the International Festival of Organ and Chamber Music in Pasłęk.

Krzysztof Urbaniak has given organ concerts on several continents and has recorded solo albums for German labels to glowing international reviews.