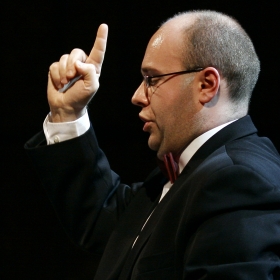 Since season 2011/2012, Dawid Ber has been the chorus master of the Artur Rubinstein Lodz Philharmonic.
He graduated from the G. and K. Bacewicz Academy of Music in Lodz, with a major in theory of music, supervised by Prof. Franciszek Wesołowski, as well as from the College of Managing Vocal and Vocal-Instrumental Ensembles at the said Academy (1998). In 2000, he graduated from the Postgraduate Choir Master Studies at the F. Nowowiejski Academy of Music in Bydgoszcz, receiving an honorable mention. In 2005, he defended his doctor’s title in conducting at the F. Chopin Academy of Music in Warsaw.

In 1995-1999, he was a full-time employee of the Lodz Philharmonic Choir. In 1996-1998, he worked as an educationist and conductor at the 1st and 2nd degree Henryk Wieniawski Musical High School in Lodz. Since 1998, he has continued this profession in the S. Moniuszko Musical School Complex in Lodz (classes in the theory of music – harmonics, ear training and mixed choir). He also taught at the 6th High School in Lodz, the 1st and 2nd degree State Musical School in Piotrków Trybunalski, the 2nd degree Social School at the National Musical Institute. In 2004-2009 and 2010-2011, he was the deputy director of the S. Moniuszko Musical School Complex in Lodz. Since 2008, he has been working in the Artistic Education Institute of the Lodz Academy of Music, where he supervises a conducting class, currently as a lecturer. Moreover, he has incessantly conducted the mixed choir at the Baptist Christian Church in Lodz since 1992. In 1996, he founded and conducted the “Alla Camera” Vocal Ensemble for 8 years. Also in 1996, he was appointed the art manager and conductor of the mixed choir of the “Lutnia” Singer Association in Zgierz. He conducted this choir for 15 years, until 2011. In 2002-2005, he conducted the Teachers’ Choir in Lodz. Since 2005, he has been directing the “Vivid Singers” Chamber Choir.

With the choirs he conducted, Dawid Ber won several dozen awards and honorable mentions at various festivals and choir competitions in the country and abroad. He went on numerous concert tours in Poland, Germany, the Netherlands, Austria, Denmark, the Czech Republic, Italy and Lithuania.