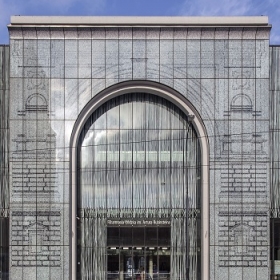 The Arthur Rubinstein Philharmonic most often features its own orchestra. Concerts are also given by orchestras from other Polish cities and from abroad, such as the Deutsche Symphony Orchester Berlin, the Shanghai Symphony Orchestra, the Orchestra of the Eighteenth Century, Concerto Italiano, the European Union Youth Orchestra, etc.

The Arthur Rubinstein Philharmonic offers concerts catering to the expectations of concert-goers of all ages and with very different musical tastes. Along with symphony concerts, we feature piano recitals, early music and chamber music concerts.

The Arthur Rubinstein Philharmonic was the first institution in the country to broadcast operas from the Metropolitan Opera (“The Met: Live in HD” series).

A number of events are addressed to children; these include the “Philharmonic: what’s the noise about?!” concert series, “Musical Discoveries” workshops conducted according to Carl Orff’s method, and “Baby Boom Bum” workshops for under three-year-olds, inspired by E.E. Gordon’s method.

During the summer vacation time, we organize The Touring Festival of the Arthur Rubinstein Philharmonic “The Colors of Poland,” which combines the artistic aspect with the opportunity to see the architectural and natural attractions of the Łódź region.

In 2010, “The Chorus (Not) for Dummies” was established under the aegis of the Philharmonic. It invites everybody irrespective of their musical skills and holds rehearsals once a week under the leadership of a professional conductor. Those music lovers who wish to expand their knowledge can attend introductory sessions for concerts. In turn, the Salon of the Friends of the Arthur Rubinstein Philharmonic is addressed to those who would like to become more closely involved in this institution, e.g., through meetings with outstanding musicians and the Philharmonic’s management.

The most important dates in the history of the Philharmonic are April 4, 1984 and December 4, 2004. In 1984, the Philharmonic officially adopted the name of Arthur Rubinstein, an outstanding virtuoso pianist born in Łódź. Rubinstein gave several performances in this city, including one of his last concerts. In turn, in 2004 the Arthur Rubinstein Philharmonic inaugurated its new hall, designed by Romuald Loegler. It was erected at the site of the previous Philharmonic Hall, which is reflected in the glass façade with the characteristic arc. The new hall was awarded second prize in the “2004 Building of the Year Competition” as well as first prize from the Association of Polish Architects for the best building financed with public funds in 2004.