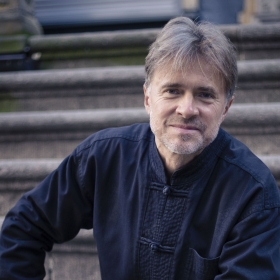 As of the 2017/2018 season, Paweł Przytocki was appointed Artistic Director of the Arthur Rubinstein Philharmonic.

Born in Krosno, Mr. Przytocki graduated from Prof. Jerzy Katlewicz’s conducting class at the Academy of Music in Cracow in 1985. In the years 1986–1987, he received a scholarship from the Bachakademie Stuttgart, where he attended Prof. Helmuth Rilling’s masterclasses.

In 2005, Paweł Przytocki started cooperation with the Grand Theater – National Opera House in Warsaw. In the 2005/2006 season, he premiered Aram Khachaturian’s “Spartacus” and led the orchestra in Piotr Tchaikovsky’s “Eugene Onegin,” Giuseppe Verdi’s “La Traviata, as well as Giacomo Puccini’s “La bohème.” In the 2006/2007 season, he conducted a premiere of “Eugene Onegin” choreographed by John Cranko.

Paweł Przytocki has also appeared at many prestigious venues around Europe, such as Musikverein in Vienna, Konzerthaus in Berlin, Palais des Beaux-Arts in Brussels, Teatro Municipal in Santiago, Théâtre du Châtelet in Paris, Musikhalle in Hamburg, and Beethovenhalle in Bonn.

Przytocki has made several archival recordings for the Polish Radio and Television, and recorded albums for the labels DUX, Aurophon, and Point Classics. His rendition of Rachmaninoff’s Symphony no. 1 was hailed by the American music magazine “La Folia” as an example of a rare level of intensity and devotion in music (along with Carlos Kleiber’s Beethoven Fifth and Sviatoslav Richter’s Appasionata).

Since 2007, Paweł Przytocki has worked at the Conducting Department of the Academy of Music in Cracow, where he runs a conducting class.

In February 2017, Przytocki led the Arthur Rubinstein Philharmonic Orchestra in a performance at the Golden Hall of the renowned Musikverein in Vienna. The great success of that concert and the enthusiastic applause of the international audience provided inspiration for his appointment as Artistic Director of the Philharmonic.