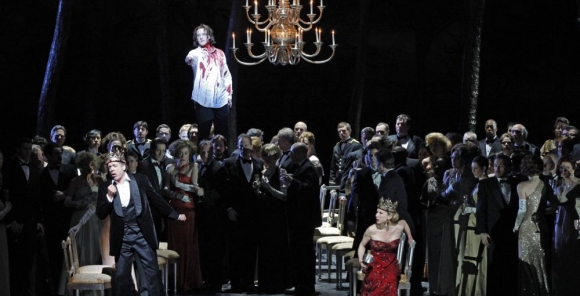 The seventh full season of broadcasts from the Metropolitan Opera in New York will be inaugurated with Giuseppe Verdi’s Macbeth. Incidentally, this is also the opera that was aired during the first transmission from New York to the Arthur Rubinstein Philharmonic, on January 12, 2008. As a matter of fact, the ARP was the first organization in Poland to join “The Met: Live in HD” program. Thanks to cutting edge technology, music lovers in this country are given the opportunity to watch operas performed by outstanding musicians and actors simultaneously with the public in New York. This concert season, we bring to you 10 broadcasts, including Bizet’s Carmen, Rossini’s Il barbiere di Siviglia, Wagner’s Die Meistersinger von Nürnberg, and Lehár’s operetta Die lustige Witwe. On October 11, the murderous Lady Macbeth will be played by Anna Netrebko, the famous New York-based Russian soprano, acclaimed for her roles in 19th century Russian and Italian operas. She will be partnered by the Serbian baritone Željko Lučić, who has sung with the Met since 2006, but it will be his first appearance as Verdi’s Macbeth.