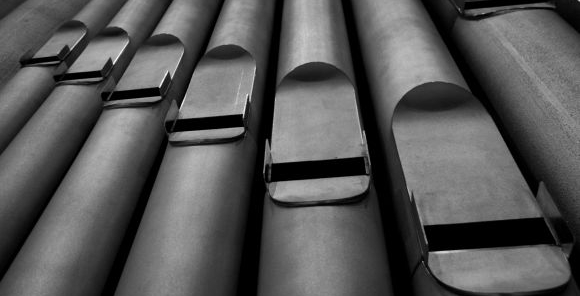 Even though Johann Sebastian Bach could play many instruments – the harpsichord, clavichord, violin, viola, and perhaps also the lute – he was first and foremost an organist. This should come as no surprise because he had been often exposed to that instrument since early childhood. Several of his uncles were church organ players. In the year 1692–1695, when Bach’s father relentlessly taught his son to play the violin and harpsichord, his uncle, an organist at Eisenach, gave him organ lessons. When Bach’s parents died, he came under the custody of the eldest of Bach brothers, Johann Christoph, an organist at Ohrdruf. At that time, the young Bach took an even greater interest in the instrument and made remarkable progress in his organ-playing skills. After leaving his brother’s home in 1700, Bach moved to Lüneburg, where he heard the organist Georg Böhm, and upon the latter’s urging he further ventured to Hamburg to familiarize himself with the organ technique of Johann Adam Reincken. Actually, Bach was willing to make great sacrifices for the sake of organ music. In order to listen to the then popular organist Dietrich Buxtehude performing in Lübeck on the Baltic coast, Bach went on a 420 km trip... on foot, as he could not afford a horse. It was the organ that was the most important instrument for Bach throughout his lifetime. The First Łódź Bach Marathon features, amongst others, Bach’s famous chorales “O Lamm Gottes, unschuldig” BWV 618 and “O Mensch, bewein dein Sünde groβ” BWV 622.