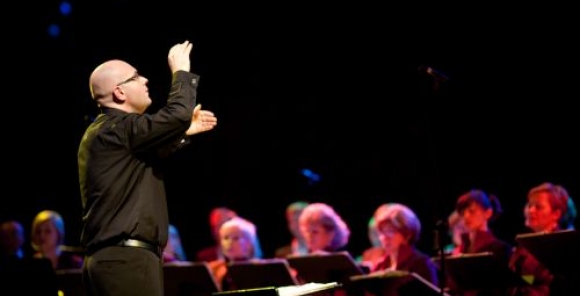 Wherever there is singing, settle down

- said Johann Wolfgang von Goethe. And indeed, singing has been an integral part of the Arthur Rubinstein Philharmonic for the past 45 years, thanks to the activity of its mixed chorus. Thus, the Philharmonic’s repertoire includes a wide range of choral works with instrumental accompaniment, such as masses, oratorios, cantatas, and passions, which are usually performed with the Arthur Rubinstein Philharmonic Orchestra. The chorus also gives performances of unaccompanied vocal music by a variety of composers from different periods, and some of that repertoire will be presented during the gala concert marking the 45th anniversary of the chorus’s establishment. The Chorus will be led by its chorus master of three years, Dawid Ber. The program consists of pieces by the Baroque supreme master Johann Sebastian Bach, the German Romanticist Felix Mendelssohn, and Polish 20th century and contemporary composers. Among the latter, of particular note are Roman Maciejewski (1910–1998), who spent most of his life abroad and whose oeuvre is still little known in Poland, and Jakub Neske, a student of the Academy of Music in Łódź, who specializes in choral music. The concert also features popular music standards, which shows the great versatility of the Chorus.